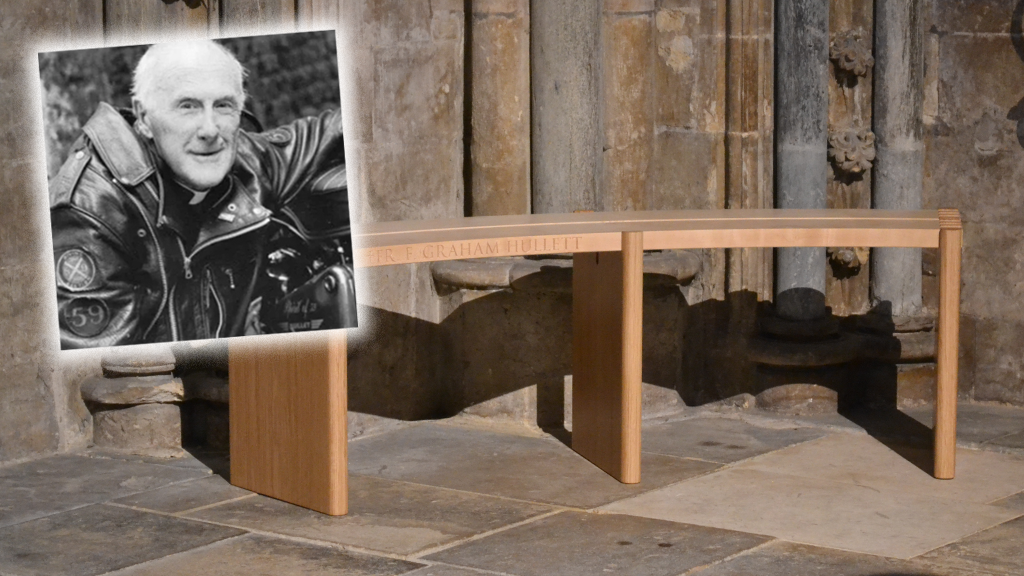 Motorcyclists who make an annual pilgrimage to Lincoln Cathedral can now witness the woodworking skills of CRE exhibitor Nicholas Hobbs.

Influenced by the Arts and Crafts Movement, Nicholas has crafted a bench in memory of 59 Club founder Fr Graham Hullett. Positioned in the Lady Chapel, it provides the ideal spot for contemplation by motorcyclists in memory of Fr Hullett. Officially recognised by the Church of England, the 59 Club was formed in London during the 1960s, a period infamous for clashes between Mods and Rockers.

The club claimed a worldwide membership of more than 10,000. A rider himself, Fr Hullett wore his dog collar under his leathers and ostensibly ran the club without rules. Nevertheless, he gained respect by being a father figure to many, approachable and down to earth, offering them moral, occasionally financial support and attending court cases. He visited prisons and carried out the duties of a cleric ­­– marrying, christening offspring and burying those who perished in road accidents.

He had a long-lasting influence amongst a large group of disaffected youngsters. In recognition, a number of early members clubbed together in 2005 to buy a Royal Enfield Bullett 500 for Fr Hullett – to get him back in the saddle and on the road again. Upon his death, Fr Hullett’s specially-painted bike was left to a member of the Spirit of 59 who subsequently offered the bike to auction to fund the permanent memorial bench at Lincoln.

Each December, on the anniversary of its dedication, motorcyclists travel to Lincoln Cathedral from around Britain, gathering in the Lady Chapel to remember the man as they sit on the bench and later meeting in a local pub to recall stories from an earlier era.

‘I create work that will stand the test of daily use and the test of time,’ he said. ‘It was my great pleasure to be invited to make this memorial bench which, alongside the Pumfrey family bench, is available for use by pilgrims for reflection every day.’

Nicholas has created many memorable items including a blanket chest in selected, figured English oak which is in the permanent Arts & Crafts collection at Leicester City.