Cliff: light at the end of the tunnel 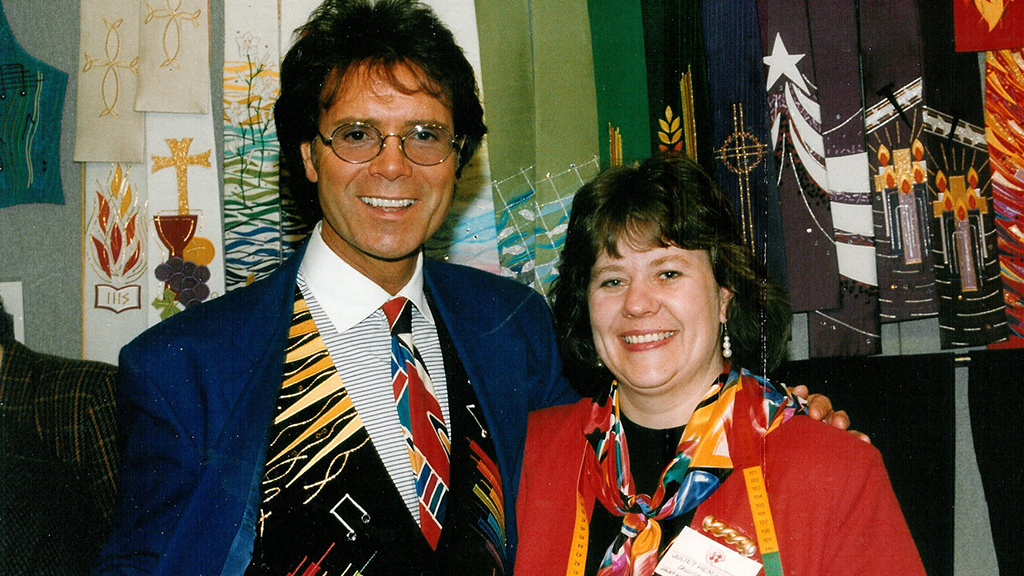 Cliff: light at the end of the tunnel

A well-honed Cliff – he was preparing to play Heathcliff at the time – is presented (in the photo above) with a stunning waistcoat at the opening of CRE 1994.

Made by top ecclesiastical textile designer Juliet Hemingray, the colourful garment was worn by the entertainer on succeeding TV programmes – much to the maker’s delight.

Juliet trained as an art and design teacher in Derby but was unsuccessful in securing a teaching post and spent the next few years ‘mending clothes and making curtains.’ In 1980 a friend approached her to design and make an embroidered preaching scarf/tippet to wear at children’s services.

‘He wanted to express the Gospel in a lively and colourful way,’ recalled Juliet, one of CRE’s most loyal exhibitors. And so was created a design featuring the God of creation who made the heaven and the earth – ‘a fun scene of hills, sheep, fish, stars, moon, sun and sky.’

Word got around and the back room of Juliet’s Victorian house was soon bursting at the seams. Her Aladdin’s cave is now in an old Victorian railway bonded warehouse. Over the years she has been commissioned to produce thousands of stoles, altar frontals, banners, copes, mitres, chasubles and other religious regalia – hundreds of orders coming from CRE visitors.

The enthronement robes worn by the former Archbishop of the Canterbury, Dr George Carey, were made by Juliet. On the release of the Archbishop’s special envoy Terry Waite, Juliet was commissioned to make a special chasuble celebrating his freedom.

‘I chose rich golds, yellow and oranges, portraying the light he was starved of for so long,’ she explained.

Her forte is taking a seed of an idea and making something that is not only a visual aid to worship but also something of beauty that will speak of the fullness and richness of the gospel of Christ.

‘It may have been presented to him years ago but Cliff, like Terry, has come through some very dark times,’ said CRE managing director Steve Goddard. ‘Juliet’s sumptuous waistcoat expresses the light he found at the end of a long, long tunnel.’